Last Sunday was Remembrance Sunday; Monday (the 11th of the 11th) being Remembrance Day proper. For friends who aren’t from the UK, firstly this commemorates the armistice signed at Compiégne which took effect at 11 o’clock on the 11th of November 1918 and effectively brought World War I to an end, and is the commemoration of those who have given their lives in the service of the country in war. During the weeks leading up to it, imitation poppies are worn, bought by a donation to the Royal British Legion, a charity for servicemen and their families, which recall the poppies which grew in profusion throughout the fields of Flanders where the greatest fighting of the Western Front took place. In the States, this is “Veterans Day”, with some of the same connotations. There’s a rather good blog post about the difference here.

Would that that title had been correct.

It is, however, the war which has had the greatest impression on me, due to two things. In 1968 at the age of 14 I went on an exchange holiday to Northern France, exchanging with a young French lad of my age. When he came over here, we took him to see some local sights and also up to Edinburgh, talking about the “auld alliance” between Scotland and France prior to the complex arrangement whereby Scots monarchs acquired the English throne for a while and, by and large, the English acquired Scotland. When I went over there, a large proportion of what I saw was the WWI battlefields and the cemeteries associated with them. And the rows of white headstones seemed to go on for ever… I walked for quite a while in one of them, looking at the names and not infrequently lack of names on them. It was, for me, an intense experience. 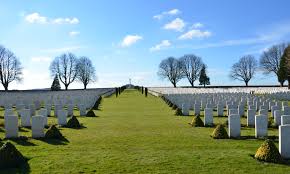 It was also clear, looking at the ground within a local wood where Hervé liked to cycle (pre BMX but pretending it was moto-cross), that the ground was still scarred 50 years later with the relics of trenches and bomb craters all over the area; it went on for miles and miles. The sheer scale of devastation struck me really forcibly, and I began reading about the history of the period. It was the first war in which slaughter was truly made into an industrial process, and, for the most part, was largely futile as neither side could break out of the trench systems for some three years, just pushing forward and back in an ebb and flow of constant carnage.

The year after that, Selby Abbey had its 900th anniversary, and the town had a festival (in which my parents were prominent organisers). One event was a reunion at the British Legion club in town of a lot of First World War ex-servicemen (that year also being the 50th anniversary of the formal termination of hostilities, which was in 1919). I went along, and was privileged to hear some of the old soldiers actually talking about what it had been like to fight. Some of them were survivors of the Bradford Pals. This was the 16th and 18th batallions of the West Yorkshire regiment. On July 1st 1916, 2000 of the Pals emerged from their trenches to attack on the Somme in the morning; by lunchtime 1,770 of them were killed or wounded. As they were raised from local areas, this meant that something like three quarters of the young men of these areas would never return. Whole streets had lost an entire generation. Part of this I learned from listening to them talk, part I had to research. Some of them, however, were willing to open up a bit, something which my father (who served in the RAF in World War II) was never really willing to do. Several of them had been about the age I was then when they lied about their ages in order to enlist at 16 rather than 18, because it was their patriotic duty, so I could engage with the person they had been a little, and feel all the more for the late adolescence they had never had.

I never felt the same about the Second World War as about the first, anyhow. The second was against a foe who I could reasonably consider sufficiently dangerous and evil to require all possible efforts to be made to wipe them out; not so the first. The German rulers of WWI were not particularly evil and frankly were not even particularly dangerous to England (though they were to France); we entered that war because of our involvement in one of two networks of alliances which had been built up to provide a balance in Europe, which network melted down as a result of an assassination in Sarajevo. We had no particular interests in the conflict between Austria and its Balkan nationalist separatists, but Russia did, and it was allied with France, and so were we and Italy, and Germany was allied with Austria and Turkey, and suddenly the fragile balance of European alliances fell apart. Or alternatively, it can be regarded allegorically as a bar fight...

Once that happened, Germany invaded France, and after a short period of “war of movement” bogged down in trench warfare which lasted over three years and stretched from the English Channel to the Swiss border through Belgium and northern France. It wasn’t the first taste of trench warfare with machine guns which the world had seen (and previous experiments should have convinced everyone concerned that this was a very nasty way to kill off a very large number of soldiers) but it was the biggest by far. For three years, England, France, Belgium and Germany poured their young people into a country-wide industrial mincing machine and received back the shreds of a generation. The generals didn’t know what else to do, hoping above all reason for a “breakthrough”, which was not going to come until some improvements in technology allowed that and the German economy was faltering seriously in continuing to provide an endless supply of munitions. Italy and Austria were busy doing the same in the Alps between their two countries as well, and for a brief period we threw the young of New Zealand and Australia against prepared Turkish positions at Gallipoli to similar effect.

So when we get to that time of year when almost everyone on the street is wearing a poppy, this is what I remember. The sheer waste of millions of young lives. We remember the armistice of 1918 rather than the peace treaty (Versailles, 1919) which finally ended the war because at the time veterans objected to any celebration of victory, and I am in complete agreement with them. As the blog post I linked to above indicates, for the most part we remember in a low-key and dignified way, pace some people who feel that the whole thing has now been co-opted by politicians and media into something more akin to a celebration of more recent wars. We remember loss, not victory.

And it can be argued that Versailles was not really a victory, because the peace treaty was perhaps the worst which has ever been negotiated. Its scheme of reparations against Germany did much to ensure the collapse of the German economy in the 1920s and 30s and produce immense resentment in Germany which gave the background in which Hitler could rise to power, such that in a very real sense World War II was just the “second half” of World War I. The associated treaties were as bad; the botched settlement in the Balkans can be argued to have been partly responsible for the various more recent Balkan conflicts including Bosnia and Kosovo, and the settlement in the Middle East out of the collapsed Ottoman Empire (Turkey) bears considerable responsibility for conflict in (for example) Palestine, Syria and Iraq, which is still an unfinished story.

It wasn’t the war to end all wars; in a sense it hasn’t actually completely ended yet itself, as the repercussions rumble on. I suppose that if you regard the second World War as merely a continuation, it may have ended all wars within Europe, as most of the countries involved are now part of the European Union (the original motivation of which was to stop this happening again) and are fairly unlikely to go to war with each other again, and that is no mean feat considering the previous history of the continent. But it was an appalling and abhorrent waste of a generation from several countries, many of whom went to battle filled with patriotic zeal. That is also large in my remembering when I wear a poppy, and during the rest of the year when I consider that wars are still occurring, and wasting the potential of young lives and the hopes of generations, and that patriotic zeal is often part of the picture. Eric Bogle wrote about this, and his words “It all happened again, and again and again and again and again” ring in my ears.

There has been a Christian concept of “just war” since theologians became aware that Christianity was becoming the religion of the then premier world power and they felt a need to curry favour with the secular power and circumvent the ethos of non-violence which had previously characterised Christianity (to my mind, in complete consistency with the gospel). World War I was not one of them on any reading of the theory. World War II, however, just might have been – unless you see it as a continuation of World War I, in which case it was preventable and should have been prevented not by “appeasing Hitler” but by not getting into the position, through war, where Hitler could rise to power. Almost none of the subsequent wars have been “just” in the Christian sense, but that isn’t something we seem to reflect on much these days.

But the poppies in particular urge us to reflect on World War I, and that should be sufficient to convict us that war is a very great evil indeed. And that it is still the eleventh hour, almost too late for us to stop, and “study war no more”  – but not quite.